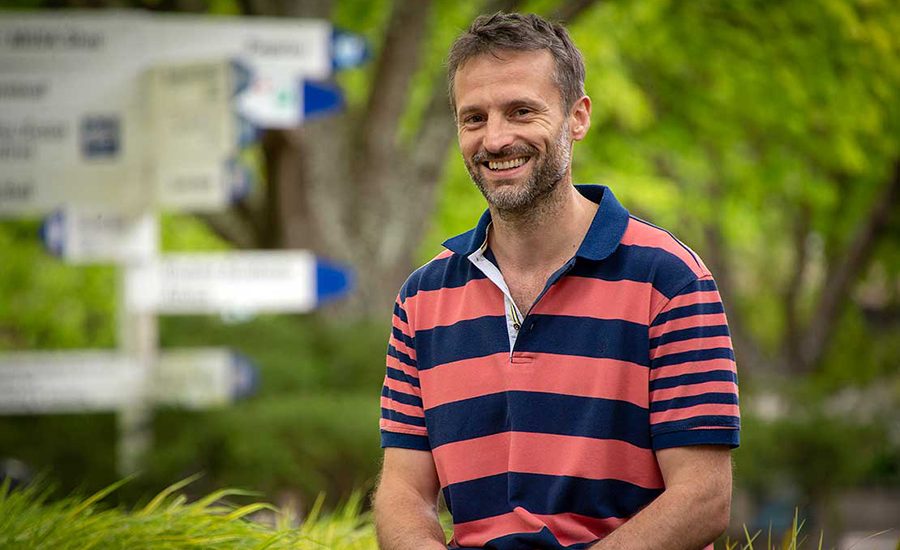 A new global report that provides advice and solutions to decision makers around how to prevent pandemics has just been released, with input from Massey University’s Professor of Infectious Disease Ecology, David Hayman.

Professor Hayman’s expertise is focused on the relationship between viruses and how they are transmitted between animals and humans, with a particular focus on bats. So, when the COVID-19 outbreak began unfolding and the world was grappling with where the virus came from and what the pandemic could mean, international and national media turned to him for possible answers.

Professor Hayman co-directs the Molecular Epidemiology and Public Health Group in the School of Veterinary Science and is a Royal Society Te Apārangi Rutherford Discovery Fellow. He has just finished co-authoring #PandemicsReport: Escaping the Era of Pandemics, after being selected as one of 22 global experts to contribute to the report that was published by Intergovernmental Science-Policy Platform on Biodiversity and Ecosystem Services (IPBES). He was the only New Zealand-based researcher to contribute.

Professor Hayman says the report was designed to give decision makers and governments of the 130 member states of IPBES options to prevent future pandemics. The authors are also hoping the general public will read it too and learn that individuals can also make a difference.

The report makes several recommendations, including: developing and incorporating pandemic and emerging disease-risk health impact assessments in major development and land-use projects; ensuring that the economic costs of pandemics is factored into governments’ policies and budgets; reducing or removing high disease-risk species in the wildlife trade and valuing Indigenous Peoples and local communities’ knowledge and engagement in pandemic prevention programs.

“The first step [of the report] was to make the link between processes that are leading to biodiversity crisis and disease emergence and look at the factors that cause infections to go from wildlife to people. Then we looked at what is causing pandemics and where they come from.

“We wanted to explain to governments, ‘this is why it’s failing to date and these are the measures we think you need to consider, to stop these in the future’.”

“It raises the question, who’s looking at the intersection of human and animal health? That’s one of the things we’re recommending is having an intergovernmental panel across all those areas, including biodiversity.”

Professor Hayman says a pandemic like COVID-19 is not new, but there needs to be change to ensure prevention rather than the current situation of relying on a reactive health response.

“Many of us [scientists] have been warning these things would happen. Viruses like the flu and HIV have all come from wildlife, so COVID-19 is nothing new and that’s the point: we’ve seen this before and need to learn from this. ”

He says New Zealand could be a world leader in the way we manage ourselves and the environment after COVID-19, but he says there has to be change. “In New Zealand we can all do more. We need to think about what we’re eating, what we’re buying and where it’s come from through to how we’re creating new urban developments, new roads and how we might do this to reduce both the impact on our environment and the disease emergence risks. If everyone all did better and had a little less, it would make a huge difference.”

The report states that COVID-19 is at least the sixth global health pandemic since the Great Influenza Pandemic of 1918, and although it has its origins in microbes carried by animals, like all pandemics its emergence has been entirely driven by human activities. The report estimates that another 1.7 million currently ‘undiscovered’ viruses exist in mammals and birds – of which up to 827,000 could have the ability to infect people.

“All wildlife have their own suite of infections; they all have their own viruses. What we’re saying is the more people go into their habitats, the more we chop down trees, build more roads, do what humans do, all of that leads to increased human wildlife contact and trade. Every time you increase those numbers, you increase the chances of disease emergence.”

Professor Hayman says there needs to be change in the way people view wildlife trade, which can often be controversial.

“People often put a racist view on it, but actually all around the world, people eat wildlife, including in New Zealand.

Professor Hayman describes Uganda as a “hot spot for disease emergence” with its high human density, high biodiversity, increasingly large livestock densities and how it’s increasingly connected. He is leading research with his Ugandan collaborators that’s trying to measure human and animal contact rates and use modern technology to identify different viruses and bacteria in both the animal and human populations.

“We have projects involving livestock, humans and mountain gorillas all in the same environment to see what infections they’re sharing, how frequently they are being shared and what the characteristics are of those infections that might lead to disease emergence.

“Then the ideal outcome is to be able to give informed advice to people about ways you can prevent that.”