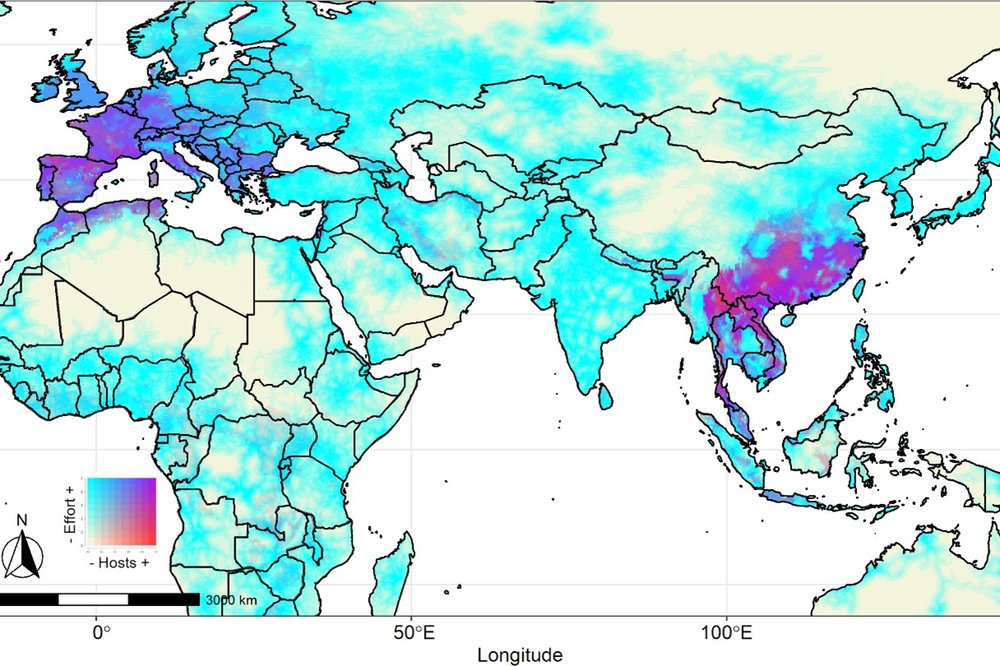 In an era that has been called ‘Pandemicene’, it is important to map regions where biodiversity and people’s health are at risk.

That is what School of Veterinary Science Professor David Hayman alongside his team at Massey University and collaborators based in institutions overseas have been researching since 2020. The multidisciplinary team across New Zealand, China, United States, India, United Kingdom, Italy, and Brazil is composed of experts in ecology, epidemiology, bats, veterinary sciences, global change biology, and physics.

“This research identifies potential distribution of bats that may host coronavirus closely related to SARS-Cov-2 based on climate and native habitats and caves where these bats inhabit,” she says. “We also take into account sampling biases on data collection of bats across their entire range. This information can help inform new models of pathogen emergence based on where people are encroaching and fragmenting biodiverse rich regions, like Myanmar, southern and eastern China, Laos, Thailand and Vietnam. Mapping host hotspots also help conservation actions that ensure that those bats are protected.”

The next steps of this research will identify the high-risk areas for disease emergence and pandemic potential from human populations and their movement.

The team identified concentrated host hotspots in Myanmar and projected range contractions for most species by 2100. Their projections indicate hotspots will shift east in Southeast Asia in locations greater than 2°C hotter in a fossil-fuelled development future. Hotspot shifts have implications for conservation and public health, as loss of population connectivity can lead to local extinctions, and remaining hotspots may concentrate near human populations.

“We project future scenarios for host hotspots considering an optimistic scenario and a pessimistic scenario for the future, based on climate change models,” Dr Muylaert adds.

The most important predictors of species distributions were temperature seasonality and cave availability, emphasising that these bats need protected areas of cave habitat to survive and also adapt to climate change.

“Host distributions are one critical component to identify areas at risk of viral spill over, and bats act as reservoirs of diverse viruses. We developed a reproducible modelling pipeline for bat hosts of SARS-like viruses [subgenus Sarbecovirus], given that several closely related viruses have been discovered and sarbecovirus–host interactions have gained attention since SARS-CoV-2 emergence,” Dr Muylaert says.

You can find the research article here:

Present and future distribution of bat hosts of sarbecoviruses: implications for conservation and public health