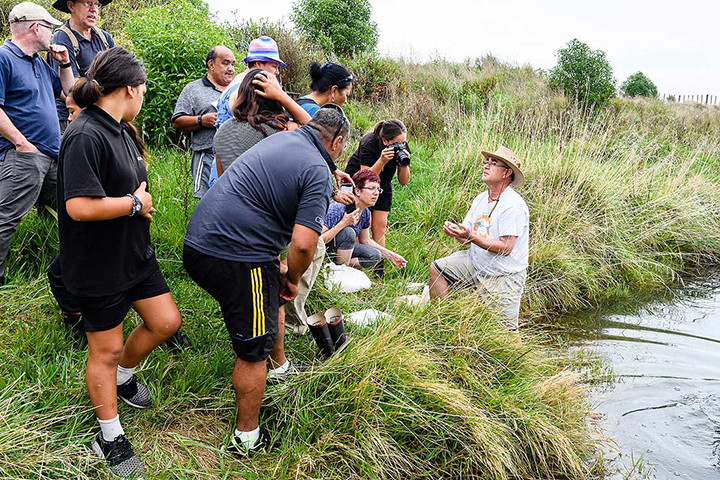 Two leading experts in agriculture and environment from Massey University will work alongside farmers from the Waikato region to find solutions to sediment retention after being granted $50,000 from the Our Land and Water National Science Challenge.

Mr Nelson was interested in whether an expensive, fully-functioning wetland or simple sediment traps was better for improving water quality in his farm’s streams .

Professor Death, who is looking forward to working with these King Country farmers to improve water quality within their region, says the project centres on a practical issue relevant to farmers – one they could address relatively easily.

“They saw the problem, we had the expertise, and then we talked about what the possible solutions might be – hopefully this project will be testing out which of those solutions is better,” says Professor Death

“What a lot of farmers would like is to get benefit from a whole range of different things. The sediment in the rivers is a problem, so reducing the amount of that is great but creating wetlands can help reduce greenhouse gas emissions, increase biodiversity, and reduce the impacts of floods,” he says.

With the funding in hand Professor Death says their aim is to build three different sediment traps in the next twelve months.

The first trap will be the ’premier’ model built with the most effort and resources and designed to address all aspects of how to improve sediment retention, biodiversity, water quality and flood mitigation.

The second trap will be more basic and less costly with its only real purpose to reduce sediment. And the third trap will be, as Professor Death describes it, “a hole in the ground”.

“We will look at the benefits that you get from the three, with the hypothesis that although all three will reduce sediment equally, the extra cost for the full-on wetlands will hopefully be balanced out by all the other benefits that they will get on their farm,” he says.

The first stage will see the team designing the three wetlands and then they will move on to monitoring before building the three traps. More monitoring will be carried out to see which trap is the most beneficial to farmers, taking into account costs, resources and time spent in the building phase.

Professor Death says new government regulations around water quality are causing farmers a lot of concern, but adds, “we do have to change the way we farm to actually make sure we don’t degrade the environment too much.”

For farmers in the lowlands the focus is on nutrients, while those in high country regions such as the Waikato and Rangitikei are more concerned with erosion and preventing sediment getting into their waterways.

“Dairy farmers have kind of got a handle on it in terms of fencing off their waterways, but for sheep and beef farmers, this is probably not the solution. It’s more about trying to keep the soil on the hills where it can grow grass and not end up in the streams and rivers. In a lot of the hill country it’s very easy for soil to wash off the hills and get into the river where it smothers the areas where fish and invertebrates live.”

Professors Death and Fuller will be working alongside Blair Nelson, his wife Anna, and Peter Keeling from PerringAg Consultants.