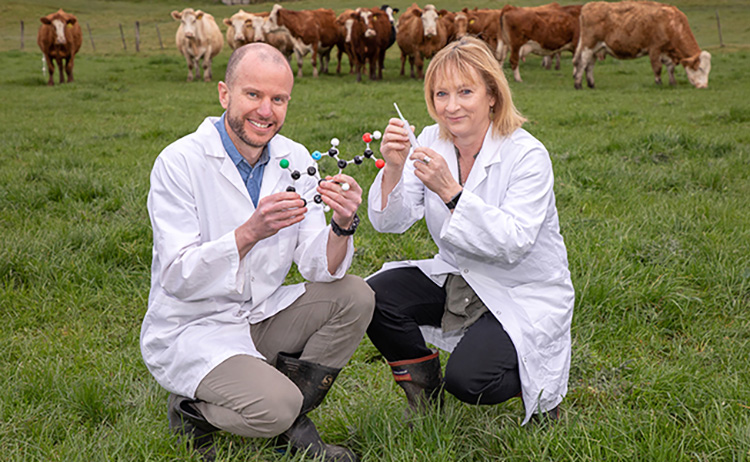 A novel approach to combatting antibiotic resistance in farm animals has won Otago Innovation’s $100,000 Proof of Concept Grant competition for 2020.

OHA investigator Professor Sarah Hook and Dr Allan Gamble, from the School of Pharmacy, will use the prize to make chemically-modified antibiotics – known as prodrugs – which only activate in the presence of infection.

“If the animal is healthy the drug will just float round and do nothing. And because it’s inactive it won’t push the development of antibiotic resistance,” Professor Hook explains.

Antibiotic resistance is a growing problem in the livestock industry, both for animal health and human health, because the drug-resistant bacteria can be transferred to humans.

The issue stems from the fact that when large numbers of healthy stock receive the drug when a herd is dosed because of one or more sick animals.

“We’ve got to think about ways of combatting the problem, especially in New Zealand because we’ve got such a reliance on primary industry.”

Professor Hook and Dr Gamble conceived the idea while wondering whether their research into developing prodrugs for cancer treatment could have other applications.

“Allan’s the brains behind the chemistry and I’ve got an interest in antimicrobials,” Professor Hook says. “We thought it was a really good way of targeting this problem.”

The more they investigated, the more promising the project looked.

“It was surprising to see that there had been little work on antibiotic prodrugs, especially in the agricultural industry,” Dr Gamble says.

The grant will support two years of work encompassing creating the prodrugs, laboratory testing and testing in animal models

Completing the team are Associate Professor Michelle McConnell and Dr Daniel Pletzer from the Department of Microbiology and Immunology.

The Proof of Concept competition allows Otago researchers to pitch an idea which can be turned into a commercial product.

It is run by Otago Innovation, a University of Otago company responsible for developing and commercialising the University’s intellectual property.

In this year’s contest, Professor Hook and Dr Gamble emerged as the winners from a record number of 32 entries.

Competition was fierce and at least 8 of the other entrants are in further discussion with Otago Innovation about progressing their project toward commercial outcomes.

“The need to shortlist was a great challenge for us and the judging panel was highly complimentary of the 10 projects that were presented to them. The winners ticked all the boxes for the judges and have a real opportunity to make a difference in the animal health sector.”

The winning team is already working closely with Otago Innovation.

“It’s really exciting,” says Dr Gamble. “As an academic, we are often focused on publishing. Working towards commercialisation of a product that we’ve developed is a new and exciting challenge I look forward to.”

Talks are underway with pharmaceutical companies which specialise in animal remedies and veterinary medicines.

“At the moment we’re working on model antibiotics, but we’ll work with the companies and if they’ve got a particular product they want us to work on, we will start looking at that as well,” Professor Hook says.

Some “really nice early results” have given them confidence they are on the right track.

“We’re developing this for animal health but we’ve got high expectations for it to move forward into human health as well,” Dr Gamble says.