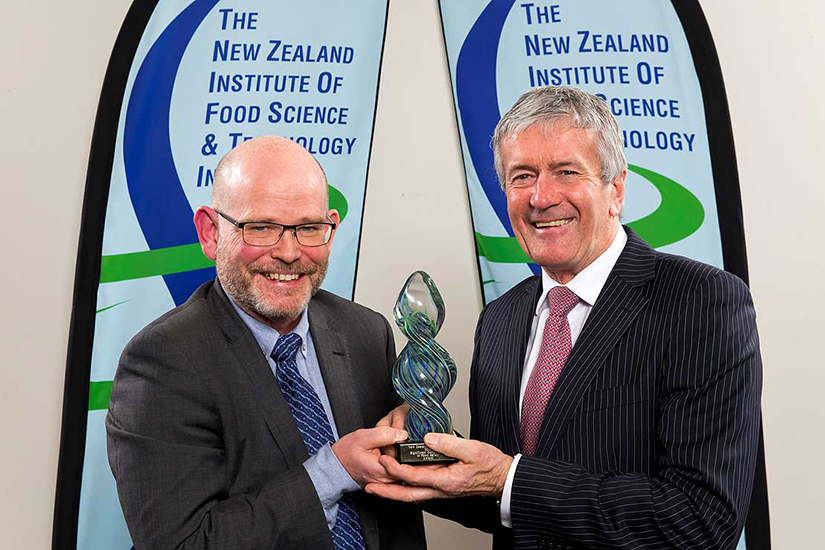 Professor French was presented the award by Minister of Food Safety Damien O’Connor at the New Zealand Institute of Food Science and Technology conference dinner earlier this month.

The award is presented to a group or individual that has made a significant improvement to food safety in New Zealand. Professor French, who heads the New Zealand Food Safety Science and Research Centre, has advanced food safety immensely since arriving in the country in 2004. His innovative research programmes and international standing have allowed him to influence industry, leading to necessary interventions.

One example is the application of whole genome sequencing to the study of campylobacter evolution, which proved its worth during the waterborne outbreak in Havelock North.

Professor French is a Co-director of One Health Aotearoa, adjunct professor at the Medical School in Christchurch, and was made a Distinguished Professor by Massey this year. He is also a Fellow of the Royal Society of NZ, recognising his contribution to food safety both in New Zealand and internationally.

In the past two years, Professor French has brought food safety experts from industry, government and research organisations together to form a cohesive food safety science and research centre. The centre’s mission is to “safeguard the health and welfare of children and families who consume New Zealand food products”. It has 20 research projects completed or underway.

“Nigel has led research programmes that have made major advances in epidemiology, statistics and modelling, and the tools developed by this research have been applied to great effect to improve public health.

“His leadership has impacted on the whole food safety and science research system in New Zealand, and has had considerable impact internationally.”

Professor French also received an honorary Fellowship of the Australia and New Zealand College of Veterinary Scientists at their awards ceremony on the Gold Coast on July 7.